History Speaks is intended to be a series of well researched and creative story telling for historical facts and local lore about a person, a building, or a location which appeals to a sense of adventure and the unknown.

North Carolina is full of mysteries. From the lives of pirates to lost munitions, this state keeps us curious with its many stories. We thought we’d share a fascinating look into one of them that would make a great screenplay.

Was he one of Napoleon’s most revered military minds or was he a guy from the Carolinas with another tale altogether? We began digging into this tale at the plaque on his grave at Third Creek Presbyterian Church in Cleveland, NC, but the story of Peter Ney may have really started across an ocean. Legend says a great many things about him, but you know how legends can be.
​
Explore the mystery of Peter Ney with us.
Look back at the messy tenure of Andrew Johnson, who was Abraham Lincoln’s Vice President on the ticket at his last election on November 8, 1864. It was a complex time with difficult history, but if you’re studying history, you’re studying things that are laced with drama and sometimes discomfort. History, like the paranormal, doesn’t give easy answers. Here’s a look at one of our most tumultuous times and the paranormal legacy it left.
On November 25th, 1893, James Reid’s foot was crushed by a freight train. His foot was amputated (possibly to the knee) two weeks later on December 7th, 1893. James lived from 1845-1920.

Because he was lucky, James lived to the age of 74. A farmer and a confederate veteran, he appears to have been a jovial person, finding humor even in solemn situations.

An active and consistent member of the Baptist church, it’s unclear why James chose to hold a burial ceremony-- with friends and all-- for his right foot in the Old Lutheran Cemetery in Salisbury, North Carolina. One may speculate that it’s because of its proximity to the tracks that claimed it or because of differing denominational burial practices between the Baptist cemetery and the Lutheran cemetery. He’s a lucky guy even in death as his story gets told frequently in books and online, but often these sources have the facts a little wrong. As a guy who liked a joke, he probably appreciates this a little. Some sources state that he lived seven years without his foot, and others say that James lived to the age of 95. The reality is that James lived 26 years with one foot literally already in the grave. The confusion may lie with his second accident, which was also around Thanksgiving time. On November 29th, 1913, twenty years after losing his foot, James slipped on a banana and broke his remaining leg. We didn’t find sources to explain why this banana fall happened. This last incident happened seven years before his death.

​James is buried in Trading Ford Baptist Church Cemetery in Salisbury, next to his wife, Martha Owens (1842-1908), who preceded him in death by twelve years. 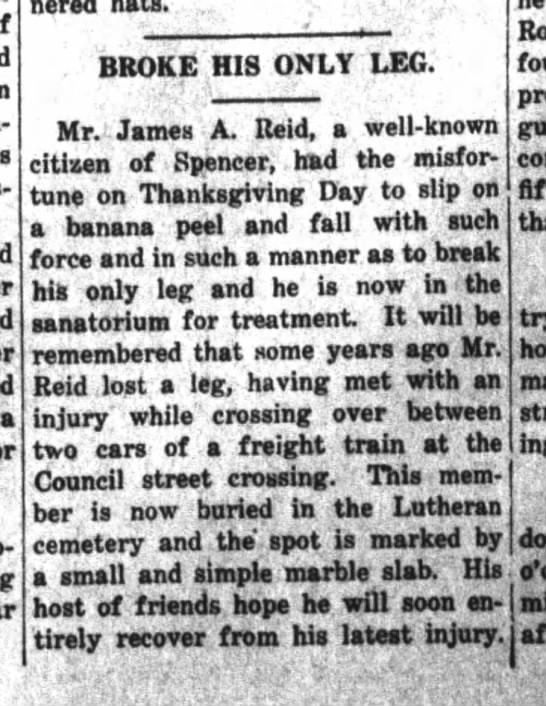 Skulls. Crossbones. Nameless graves. Salisbury’s Thyatira Church is full of grace… and mystery.
The Grand Old Lady Hotel, located Balsam, NC, was built in 1908; people have often related tales of those souls who may have passed away in her rooms. Here’s some local lore of people attributed to having died on site and in the area.
Research into the history of the local legend surrounding the murder of Deputy Claud Greene at the Balsam Schoolhouse, Balsam, NC. Deputy Greene is often mentioned when discussing possible hauntings at The Grand Old Lady Hotel. ​
Powered by